Fresh back from the first annual CEPOS conference on human rights I just want to upload some pictures from the event where I duly noted that the introductory programme contained quotes from a report I had supplied chief legal officer Jacob Mchangama with a few days ago.

The topic: Should the UN continue to be liberal democracies primary forum for the protection and propagation of human rights?

(Above) Line Barfod and Søren Pind

(Above: Morten Messerschmidt and Naser Khader) 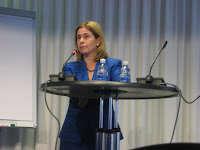 Anne Bayefski. Senior fellow at the Hudson Institute. Former member of the Canadian delegation to the UN General Assembly and Human Rights Commission. Senior editor at the Eye on the UN 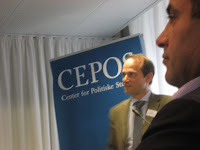 Morten Kjærum (In the picture behind MP Naser Khader:

The talks did not give a lot of new information but I was relieved to experience the seriousness with which everyone except Morten Kjærum and Line Barfod discussed the idea of creating a union/club/whatever of democracies around the world. I don’t know why John Mcain is always mentioned in this context. To my knowledge he did not come up with the idea but is just another –albeit prominent – supporter of it.

Coming from the far left of the political spectrum it was not surprising that Line Barfod is of the opinion that the primary objective of any international body is to talk. Irrespective of what the subject of the conversation is or who the partners are or what else is going on – so long as we keep talking there is hope. And THAT is what is important, she thinks. Although a strong supporter for democracy as such, she was not too happy about supporting a club for democracies if that could in any way be construed as rain on UN’s parade. Yay for the dictators’ talking club.

In the minds of Line Barfod’s tree-hugging segment of the political spectrum it is of the highest importance to show solidarity with the oppressed masses of the world by not speaking too harshly to their oppressors – lest they take it out on the innocent populace.

Morten Kjærum is deeply involved with, not to speak of employed by, the current system providing a forum and funding for the world’s dictators to come and give lectures on racism and how the truth hurts religious feelings. He could hardly be expected to support the idea of creating a competitor to the UN. Irrespective of the fact that no one proposed leaving the UN altogether he felt that creating a forum for the world’s democracies would be like ‘leaving the oppressed behind’.

Morten Kjærum chose to base his optimism and support for the current UN system on the fact that ‘at least human rights conditions are better in many parts of the world today than they were 60 years ago’. Secondly he placed a lot of emphasis on the fact that ‘things are moving, an office has been established and the ICC is in place’.

I always did think that the Danish Institute for Human Rights was living in fantasy-land. Morten Kjærum’s lofty speech, which did not even touch on the question on today’s programme: what to do in the face of OIC’s attack on freedom of speech, just confirmed my opinion. Who cares if things ‘are moving’ if the reality is that it is the OIC pushing and succeeding with the agenda that religions (read: Islam) must have rights and that they most come before individuals’ rights. If dictatorships manage time and time again to use the UN body to attack their enemies and shelter each other from criticism. A human rights body that can put Libya in the chairman’s seat is not worth spending time on.

Morten Kjærum was disappointed by the fact that the West today seems to have no human rights’ agenda. At least, he said, the rest of the world did. Especially the US’ passivity was disappointing.

As Anne Bayefsky rightly pointed out that the West is voted down time and again on anything that matters. Any support by the US for a proposal is the kiss of death because everyone else will vote against it just for the heck of it. Secondly, she said that the only way we are ‘turning our backs on the oppressed’ is by giving legitimacy to dictators in forums such as the UN.

The Danish Institute for Human Rights had compromised themselves in my eyes long ago. Today that opinion was confirmed.